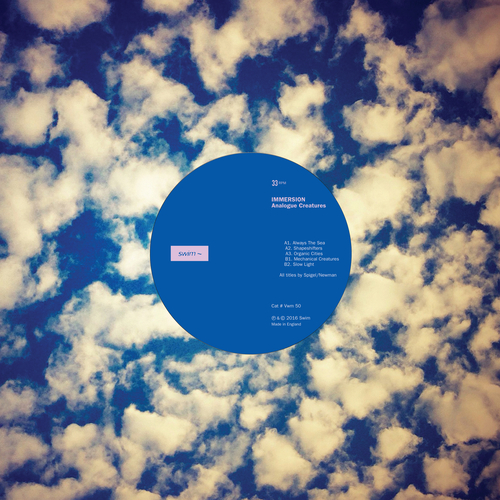 Malka Spigel and Colin Newman’s Immersion came into being in the early 1990s, against the backdrop of the European minimal techno scene. This offered an immediate context for them to pursue the instrumental electronic work on which they had already embarked, driven primarily by Spigel’s natural affinity for abstract, non song-based structures — a creative area she’d been exploring as far back as the mid-1980s in Brussels, on home recordings with Minimal Compact band mate Rami Fortis.

Energized by techno’s renewed DIY ethos, the couple founded their own label, Swim, as an outlet for their projects. The first two releases were Spigel’s Rosh Ballata (1993) and Tree (1994) by Oracle — a collaboration between Newman, Spigel and Minimal Compact’s Samy Birnbach. The next Swim release would be their debut Spigel-Newman album but, rather than use their own names, they adopted a strategy that was very much of its time. “We had two records out on the label,” explains Newman, “and we needed to do more. So we had to have a new identity, and we made a group up. This was deep in the techno period, when making up identities was de rigueur: people did compilations where they were all the artists. They had lots of different names on them, but it was the same person. I was kind of inspired by that idea of making up a mysterious group and nobody knowing who they are.”

Immersion was such a group. “We originally said in the press releases that they were German,” laughs Newman. “You could get away with that sort of thing in those days.” Spigel remembers that the subterfuge went beyond their fake provenance: “We also did some publicity photos with wigs, masks and dark glasses. It was really stupid!” Even so, it did the trick: “That first Immersion album actually sold quite well in Germany,” says Newman. “It got a certain amount of attention there — not so much in Britain, because Germany was techno central at that point in the early ’90s.”

The duo’s first record, Oscillating, came out in 1994, followed a year later by Full Immersion, a collection of remixes by a diverse global cast of DJs and producers, including Claude Young, Mick Harris, Gez Varley, Mark Gage, Fred Giannelli and Trawl (Robin Rimbaud/Scanner). A third record, Low Impact (its title inspired by architectural design theory, not aerobics), appeared in 1999. Immersion hit their stride on Low Impact, particularly with epic, layered ambient dronescapes like “Days Under the Sun,” “Self Portrait” and “Expanded Now.” For Newman, such tracks best capture the essence of Immersion, encapsulating something of the broader nature of this synth-centric collaboration with Spigel over the years: “Immersion is the purest ‘version’ of Malka and me, because it’s not her project, and it’s not my project: it’s our project. And musically, it’s also got a kind of purity. You can’t tell who’s playing or what’s playing.” Spigel concurs, emphasizing the fluid set-up of Immersion: “There’s no fixed roles in terms of the instruments we play.”

The fact that Immersion found favour with German listeners also made sense insofar as some of Spigel and Newman’s more abstract, beatless explorations resonated with the earliest work by Popol Vuh, Tangerine Dream and Cluster. But while much of that groundbreaking German electronic psychedelia was devoted to spaced-out, ethereal ambiences, the aural environments constructed by Immersion feel more grounded, often rooted in the material space of the contemporary cityscape: timeless and yet completely modern, Immersion’s sound is perhaps best described as urban kosmische.

Although Immersion made a few live appearances after Low Impact, the first decade of the new millennium saw Newman and Spigel refocus their attention on song- based music: the avant-pop supergroup Githead, Newman’s Wire and Spigel’s solo work.
So why have they reactivated Immersion? And why now?

As Spigel tells it, the quick answer is that they went shopping: “We were in New York in May 2015, at the end of a Wire tour, and Colin bought an analogue synth — an Arturia MicroBrute. When we got home, we decided to try it out, and it started from there.” Newman agrees that it was all very simple, that there was no preconceived plan: “It developed just like that, without any real objective in mind.” However, what they heard as they were tinkering with the MicroBrute soon began to sound like Immersion. This set them thinking about how a project dormant since the late 20th century might fit with their current creative orientation, as well as with the wider musical landscape.

The possibilities were immediately apparent to Newman, and he believed it made perfect sense to return to Immersion: “It felt like the right moment to do something with analogue synthesis again, and it felt like it could work to do something with instrumental, free-flowing music, music without verses, choruses and sections — particularly because it’s a good contrast to our song-based work with Githead and
Wire. Their records exist in a world of pop and rock, whereas Immersion doesn’t. It exists on its own logic...and it’s very easy to do!”

The methodology behind Analogue Creatures remains fundamentally similar to Immersion’s intuitive modus operandi of the ’90s. “It’s all about analogue synthesizers and layering,” says Newman. “You begin with one part and then play on top of it, pass after pass, building up a track with loops of synthesizer and making an arrangement out of it. It’s very organic: there’s not a real sense of direction, it’s just the shape it comes out.”

Spigel and Newman feel that this predominantly analogue, manual approach streamlines and accelerates the composition and recording processes, avoiding some of the opportunity overload and option paralysis that can come with working in the digital domain: “You can make all this stuff in the digital world,” Newman allows, “but there’s something quite fast about doing it analogue: it’s hands-on. That’s what’s good about it.”

The Korg MS-10 synthesizer is the cornerstone of Immersion’s analogue architecture as far as Newman is concerned: “The distinctive thing about Immersion is the MS-10. There’s always the Korg in there somewhere, in every record.” Nevertheless, the duo recognize that it’s a machine with an obstinate, willful personality. “It’s so unpredictable,” says Spigel. “You never know what mood it’s going to be in.”

The MS-10 is central to “Mechanical Creatures.” With its hypnotic, revolving drone, this is classic Immersion, building and morphing almost imperceptibly as it runs its austere course. “It was the first thing we did for the record,” Spigel recalls. “It was like nothing had happened in between the last Immersion and the new one. It was like it was a sonically updated version — but with exactly the same atmosphere as an early Immersion track.”

Despite that continuity, there’s also some departure from Immersion’s original synthesized template. Spigel explains: “There was no guitar ever on early Immersion — it was all synth. That was how we started, but I had a strong feeling this time that we couldn’t just repeat the same Immersion that we did a long time ago. I felt it should make a step forward and do something it hadn’t done before, which is what it did with the guitars.” Underscoring the fluidity and interchangeability of the musicians’ roles in Immersion, it’s actually Spigel, a bassist, who contributes several guitar parts. On the mesmerizing, Roedelian “Slow
Light,” she plays Newman’s electric 12-string through an organ pedal, in the process mysteriously transforming the guitar into a spinet.

In addition to guitars, Newman and Spigel have introduced some other new instruments to Immersion 2016. One of these is a Vermona analogue synthesizer, played by guest Guy Schneerson. This makes its distinctive presence felt in the arpeggiated patterns of “Organic Cities,” alongside the droning moan of the MicroBrute. Still, it’s not all analogue synthesis on Analogue Creatures, and a couple of virtual tools are also put to use: a Waves Element synth and a G-Force M-Tron Pro plug-in, both of which have seen recent action on records by Wire, Githead and Spigel.

Although the track titles came after the completion of the work and were only randomly assigned, they’re not without significance — offering glimpses of the
natural environment that’s currently inspiring Newman and Spigel. After a quarter of a century in London, they’ve just completed their first year in Brighton, on England’s south coast, and the new surroundings have certainly made an impression, filtering into their creative sensibilities. “We’re so close to the sea,” says Spigel. “It’s less than 10 minutes away, and it’s different each time you see it. You notice the light and the quality of the air. It’s something we experience when we walk every day. Every hour it looks different. And we’ve also been inspired by sound — the natural sounds in particular, like the seagulls.”

In the context of these observations, titles like “Always the Sea,” “Shapeshifters” and the synesthetic “Slow Light” make perfect sense. Ultimately, however, the titles resist any fixed meaning and simply gesture towards the broader appeal of these tracks, with their open-ended, kaleidoscopic identities. “Shapeshifters” is a case in point: maybe it alludes to sea- and cloudscapes in constant flux or to the subtly changing patterns of Spigel and Newman’s quiet, trance-inducing electronic canvases, or perhaps something else entirely. Whatever, it embodies the essential character of Immersion: “ ‘Shapeshifters’ is a title that fits us as well,” Spigel says. “We always do something different.”

Unfortunately at this time we can't offer all the Immersion - Analogue Creatures tracks as individual flacs, as some of these tracks exceed the shops maximum (9mins) download length.

Unfortunately at this time we can't offer all the Immersion - Analogue Creatures tracks as individual flacs, as some of these tracks exceed the shops maximum (9mins) download length.